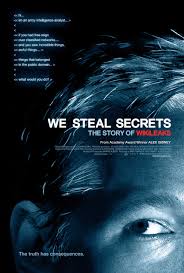 You’re probably asking yourself one of two questions. One, what is WikiLeaks? Two, who is that man on the cover there? Well, to answer, WikiLeaks is an international, online, non-profit organisation which publishes secret information, news leaks, and classified media from anonymous sources, and that man is Julian Assange. If you hadn’t heard, Julian Assange is the founder of WikiLeaks and is one of the most notorious men in the world, as of now. So, what’s all the fuss about? Let me tell you.

WikiLeaks, founded in 2006, is an organization that acquires classified intelligence from any up-loader from around the world. Thousands of top-secret U.S documents have been stolen and uploaded to WikiLeaks site. While that act in itself is regarded as “treason” and espionage, it has also brought hundreds of scandals that have been swept under the rug into the public eye. The morality of these uploads takes center stage in this Documentary. While on the one hand, stealing and uploading classified and secure documents is illegal. On the other hand, the uploading of said documents has resulted in numerous examples of government cover-ups that harmed innocent civilians during the War on Terror. So, is WikiLeaks doing us a favor, or is it doing more harm that it is good?

Another controversial issue surrounding WikiLeaks is the fact that they have not been shut down. Why is that? I’d say watch this Documentary to find out. The story also follows the tale of Bradley Manning, a U.S Army Private who was outed for uploading tens of thousands of government documents to WikiLeaks. His contribution sparked a large debate over whether or not WikiLeaks should be shutdown when the video “Collateral Murder” shocked the world. Manning is currently in jail for treason and Assange is currently taking refuge in the Ecuadorian Embassy in England. Due to WikiLeaks’ privacy policy, they never know who uploads the files. In this case, Manning has proved problematic for Assange. This Documentary illustrates both stories very well and it is relatable to everyone, especially with the new NSA scandal involving Edward Snowden. Should he be tried for treason? I won’t tell you that, but I will tell you my Top Ten Thoughts on We Steal Secrets: The Story of WikiLeaks!

WARNING! THE FOLLOWING FOOTAGE IS NOT SUITABLE FOR YOUNG CHILDREN!

I think that even though this is a Documentary, everyone is going to enjoy this film because it relates to everybody. It will have you questioning morals and thinking for yourselves. It’s presented very well and has more intrigue than your average Documentary. If you love staying up to date with current news and controversies, this is the film for you. Now that we have the NSA scandal, this film has even more of an impact. Whether or not you like Documentaries, you should give this one a shot because it won’t disappoint!

We Steal Secrets: The Story of WikiLeaks Trailer

One thought on “We Steal Secrets: The Story of WikiLeaks (2013)”