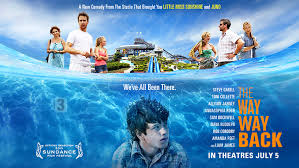 From the Oscar winning guys who wrote The Descendants, comes The Way Way Back, a film about loneliness, family, and the impact one person can make on your life. Jim Rash and Nat Faxon have now tried that hand at Directing, along with writing this movie. The result?  The years most heartwarming and touching film!

The film follows 14-year-old Duncan (Liam James), as he’s strung along for a Summer trip that he wants no part of. His mother, Pam (Toni Collette), has recently started dating Trent (Steve Carell). Trent is rude and overbearing towards Duncan, but is more relaxed and kind to his daughter Stephanie (Zoe Levin), who is nothing but a witch to him. Duncan is antisocial, awkward, and doesn’t really have friends or people who understand him. Things only get worse when he shows up to Trent’s beach house.

There, we meet couple Kip (Rob Corddry) and Joan (Amanda Peet), and Trent’s crazy neighbor Betty (Allison Janney). When surrounded by them, Trent returns to his teenage years and drags Pam with him. This practically exiles Duncan, except for the fact that Betty has an attractive daughter, Susanna (Annasophia Robb), to whom he takes an interest in. He begins to open up more around her after he meets Owen (Sam Rockwell), the owner of Water Wizz Water Park. Owen’s carefree attitude and love of laughter helps Duncan deal with his dreadful life. The rest of this wonderful film is for you to experience yourself, as it is one that will stay with your for a long time!

What works so well for this movie is its cast. Sam Rockwell leads one of the best ensembles in a film this year. His sarcasm and wit fuels his terrific performance. He’s one of Hollywood’s most underrated actors (in my opinion) and will hopefully gain some traction with this film. The writers/directors of this film have created yet another great Drama/Comedy. I can’t seem to say enough great things about this film, but if you’d like some more, they’re located bellow in my Top Ten Thoughts on The Way, Way Back!

The Way, Way Back has to be one of the finest films of the year! It’s a multitude of comedy and drama that will have you riding an emotional high the whole way through! The fantastic dialog is delivered wonderfully by the amazing ensemble in this film. It touches on loneliness that we all feel and how we can eventually overcome it through one kind person. One kind person is all it takes. In this case, one amazing movie has cured mine and many others movie loneliness. What we get from this film is one of the best times at the movies! This is a film that will touch everyone who watches it and is one that should be viewed by any and everybody! So far, this is my favorite film of the Summer!

The Way Way Back Trailer