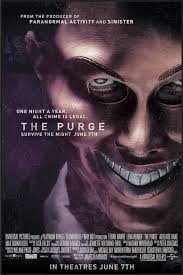 The Purge: A twelve hour period that occurs once a year, in which all crime is legal, including murder.

The Purge has brought America back to its glory! There’s hardly any poverty, unemployment is at 1%, and crime is at an all-time low. America is a nation reborn! The purpose that The Purge serves, is to allow Americans to release their pent-up anger and hatred in an effort to get it all out there on one night. This has effectively strengthened the U.S economy and gotten rid of most of the homeless. This is a very interesting concept that’s been messing with my mind for days now.

This film follows James Sandin (Ethan Hawke), a security systems salesman, and his family on the night of The Purge in 2022. After his family is secured within their fortified house, The Purge begins and all is well. That is, until James’ son, Charlie (Max Burkholder) opens up the system to allow a stranger in. This stranger (Edwin Hodge) has been injured and is being chased by a group of ruthless Purgers. James and his wife, Mary (Lena Headey) are on the hunt to find this stranger within their house, when suddenly the group of Purgers (whom were chasing this man) arrive at their doorstep. They ask for the filthy homeless man, as they wish to purge and brutally kill him. The family is now in a race against time to find the man before the Purgers enter their home and kill them. That’s the gist of the film, now here is what I did and didn’t enjoy about this film!

Come on Ethan… What are you doing in this poorly done script? Thank god for Before Midnight…

All in all, this film is an 85 minute, jump scare movie. It had the potential to elaborate on its incredible concept, but it chose to focus on home invasion. I certainly had my fair share of mini heart attacks as masked invaders would pop up every now and again, but there wasn’t a substantial aura of horror in this film. I guess, if anything, it’s a thriller. Though, it’s thrills are easily anticipated and only last a few seconds. Ethan Hawke saves this movie with his dedication and immersion into his role. He’s a fantastic actor with a very broad acting range. The main masked villain in this film is incredible as well. He does a fine job as a representation of those who choose to partake in The Purge. His smile and devious monologues will haunt you… I promise. After accepting that there wouldn’t be any detail about The Purge’s beginning, I’d hoped that we (the audience) would get the scare that we came for. However, advertisements have displayed this as a horror film and have gotten our hopes up. I’m not saying that you shouldn’t see this movie, but I would just be aware that it’s not a horror film and you don’t learn too much about why certain things happen. You’re going to be scared a few times, but nothing really stands out as terrifying in this movie, besides the masked Purgers. If you see it and you like it more than I did, that’s awesome! I’m glad you can appreciate it more than me. I’m not a huge horror/thriller guy myself, so maybe I’m being to hard on it. If you don’t end up enjoying it, it’s only 85 minutes, and those 85 minutes go by pretty quickly. Either way you look at it, this movie fulfills its goal to get you to jump and scream in your chair!