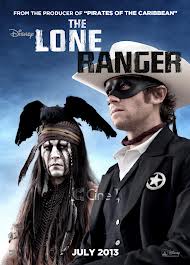 After sitting through 149 minutes of this less than mediocre movie, I couldn’t wait to go outside and bathe in the sun because it was more entertaining than The Lone Ranger. I’ll be perfectly honest, this is a really boring film. If a movie is going to be 149 minutes, it had better captivate me for the majority of the time. Unfortunately for myself and all who go see this, that’s not the case. I often found myself fantasizing about a scene where Django would come in and have another epic shooting scene. Alas, there was very little of that in this film. Well, at least by its’ protagonists Tonto (Johnny Depp) and John Reid (Armie Hammer) anyways.

Speaking of  the protagonists in this film, John Reid, The Lone Ranger, is supposed to be the star of this film. That’s how it was in the T.V show and the movie is called THE LONE RANGER, but they spend most of the time focusing on Tonto because it’s Johnny Depp. Gore Verbinski, the films’ director, is famous for directing the first three Pirates of the Caribbean films and Rango, all starring Johnny Depp. Depp, unfortunately, has become a typecast for these odd roles because he plays them so well. In what could have been Hammers’ first big role, The Lone Ranger makes you sit with Depp and endure odd retelling of his adventures with The Lone Ranger. Oh, and he tells these stories to a kid dressed like The Lone Ranger while he’s in an exhibit after he’s over 100 years old. Right…

The visuals are very impressive. This film looks very good and has a pretty solid cast to go along with it. It’s screenplay and telling of the story is where it goes downhill. It’s a very loose story that is told in a very stupid manor. The pace is unbearably slow and there were more anti climactic scenes than I could count on my hands. Also, Tonto, the Comanche Indian, speaks with 21st century phrases and is not really like a Native American at all. Mix that in with the fact that it’s hard to understand Armie Hammer most of the time and you’ve got a movie that doesn’t make a lot of sense. I hope I’m not boring you with my banter, so I’ll just shift my negativity over to my Top Ten Thoughts on The Lone Ranger!

Tonto… You will always remember this as the day that you failed at recreating Captain! Jack! Sparrow!

The Lone Rangers’ disappointment is not completely comparable to that of After Earth’s, but it’s still really disappointing. It’s 149 minutes of slow “progression” with dialog and themes that just seem out of place in the films setting. Tonto’s character doesn’t seem realistic and if anything seems like a copy of Jack Sparrow. You won’t understand Hammer half the time and you’re going to find yourself praying for the movie to end. I wish I didn’t dislike this movie so much, but it’s really hard not to. It sets itself up for failure. If you really want to see this film, it’s your funeral. I’d suggest waiting until this comes out on DVD so that you can rent it, but that’s still if you REALLY want to see it.