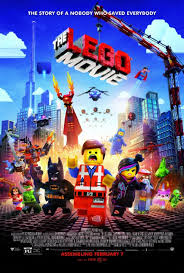 LEGO’s have been a part of many children’s childhoods. The concept of taking little bricks and piecing them together to create contraptions or structures, blew up and spread around the world. Kids of all ages played with LEGO’s and followed the instructions to create impressive things. Then, something wonderful happened. Kids began leaving the instructions behind and began creating new structures with the many different pieces they had. Not only did this mean that people were making cool structures, but it also meant that people were using their imagination and were being creative.

Emmet (Chris Pratt) is your average, everyday worker. He wakes up to the same routines and follows the LEGO instructions that dictate everyone’s lives. Lord Business (Will Ferrell) is in charge of the realm and makes sure that everyone follows his orders. He’s brainwashed the population into doing the same mindless activities everyday, in order to smash creativity. Things only worsen when Lord Business acquires the Kragle (Krazy Glue) from Vitruvius (Morgan Freeman), the wise and blind MasterBuilder. The only thing that can foil Lord Businesses plan is the “Piece of Resistance”, that Emmet accidentally stumbles upon while spying on a beautiful girl named Wyldstyle (Elizabeth Banks).

Upon finding the piece, Emmet is told that he is the “Special” and that he is the one who will bring the MasterBuidlers together and will aid in the defeating of Lord Business. All is well, except for the fact that Bad Cop (Liam Neeson) is hot on the trail of Emmet and Wyldstyle and will stop at nothing until they’re destroyed. Wyldstyle introduces Emmet to her boyfriend, Batman (Will Arnet), and to Benny the Spaceman (Charlie Day), Metal Beard (Nick Offerman), Unikitty (Allison Brie), and the other remaining MasterBuilders. Together, the must band together to let freedom and creation ring. However, Lord Business has a few tricks up his sleeve that may stop the MasterBuilders. Emmet must find it within his plain self to save the day and the realm!

The LEGO Movie has done something very original and very cool. Its managed to take a beloved childhood “toy” and make it fun for people of all ages. LEGO has partnerships with so many different franchises and it utilizes those partnerships to make this film feel somewhat familiar, while also having it stand in a league of its own. I was hesitant about this film at first, but now, I really love it and I can’t wait to go see it again. There’s something really special about this film and there’s no doubt in my mind that this film is going to become a big hit for all audiences.

The voice acting in this film is amazing and a whole lot of fun. Pratt and Banks shine in their lead roles, especially as their characters develop. Pratt has a sincere and relatable tone and becomes the everyday kind of guy that you can relate to. Banks is the strong female lead who is tough and sensitive and isn’t afraid to kick a little butt on the side. Freeman sinks back into his role as God, Neeson has fun playing a good and bad cop, and Arnet gives us a funny Batman to rally behind. Will Ferrell gives us his voice and his person in a role that elicits laughs and some sincerity as well. Other voice parts include Jonah Hill as Green Lantern, Channing Tatum as Superman (Green Lantern has a major crush on Superman), Cobie Smulders as Wonder Woman, and many more!

What really blew me away were the visual effects. Everything you see in the film is constructed with LEGO’s and operates how you think it would. When a structure crumbles, the pieces break apart and fall into a pile. When water splashes, white and blue pieces shift and creates waves. The bullets in guns fly by in spectacular fashion. The MasterBuilders create unique structures like one would create in a LEGO video game. There’s so much attention to detail that really makes this film stand out. Even with the characters, their facial expressions are masterfully done. There’s never a shortage of awesome effects on the screen and this film is done incredibly well.

This film finds a great bridge between being a movie for kids and being a movie for an older audience. Kids will be amazed by the effects and entertained by the cast. Adults will be as well, but there’s a great lesson to be found in this film. The characters under Lord Business’ rule live the same days for their whole lives and do everything by the books (literally). Emmet and the master-builders are creative and are always finding new things to build and new inventions to make. In a great scene towards the end, characters realize that LEGO’s are about freedom of building and letting anyone of any age make something that’s unique to them. Adults can play with toys to, as long as they maintain that child-like sense of wonder and imagination. That message was clear to me and it’s one I’m glad I caught.

As far as negatives go, there’s not much that I can find and I don’t want to spend time looking for them either. A lot of the comedy in the film relies on other characters that LEGO has the rights to and they make jokes that only make sense to them. There are many of those and sometimes, I just wish that they left the humor to Pratt and Banks, who are clearly able to carry the film. The film does stretch a bit long towards the end and it gets a bit confusing, but it’s nothing to worry too much about. I just wish that we spent more time with the fun characters and that we could explore more of the LEGO realms!

It’s not a stretch to say that I had a great time seeing this film. From the hit song, “Everything Is Awesome” performed by Tegan and Sara ft. The Lonely Island, to the unbelievable effects and great characters, The LEGO Movie is one of the best times at the theater you can have. Kids will laugh and have a great time and so will the adults. There’s so much fun to be had in a film that doesn’t have too many limits when it comes to cameos and characters, especially when those characters must behave in accordance to the fact that they’re LEGO’s in a LEGO world. This film represents a unique idea that is as creative as it is entertaining. This is a film you really don’t want to miss and it’s one to enjoy with the entire family and/or a large group of friends. Just keep in mind that you’re never too old for LEGO’s.