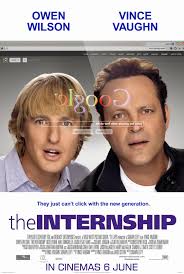 Welcome to almost two hours of Google Advertising and the comedy genius of Vince Vaughn. The Internship follows Nick (Owen Wilson) and Billy (Vince Vaughn), two down on their luck salesmen who’ve lost their jobs and all hope. That is, until Billy lands the two an interview for a possible internship at Google! The two can talk a fantastic game, but can they survive the “Mental Hunger Games” that Google throws at them? Of course they can, because this is an underdog story. However, can Owen Wilson and Vince Vaughn reach that level of comedy that Wedding Crashers reached? Not so much, unfortunately.

The Internship was co-written by Vince Vaughn and Director Shawn Levy. This movie has a lot of the Vince Vaughn, rapid-fire humor that we all know and love. For that purpose, this movie is often times hilarious. Owen Wilson brings back that lovable charm that he does so well, and he and Vaughn have great chemistry (as they always do). Where this film falls short is its formulaic underdog story. It’s incredibly predictable and something audiences have seen time and time again. It’s hard to top a movie like Wedding Crashers and The Internship just can’t do it. Maybe, it’s because the two have lost their touch. I’d like to think though, that perhaps Google might have had a large say in what the two could get away with. To quote Mike Ward at http://shouldiseeit.net/  “Google may be the reason that this film earned only a PG-13 rating, and not an R rating”. I feel like if this movie had been more risqué, it would’ve fared better. That’s not to say that I didn’t enjoy this movie though. There are tons of laugh-out-loud moments that will have you roaring in the theater. There are also lots of run on moments that seem Family Guy-esque, as they have no relevance and just drag on (I love Family Guy, don’t get me wrong). It was a lot of fun to see the duo back together because they have a one of a kind comedy relationship that most don’t. That in itself is enough to get someone to the theaters to see this film. Here’s what I Did and Didn’t Enjoy, in Tiffany’s Top Ten Thoughts!

Regardless of this film’s shortcomings in terms of living up to Wedding Crashers, this film does offer lots of laughter and some heartwarming scenes. The feel of Google in this movie is strikingly accurate to what it’s really like to work there, so that’s a huge plus (I speak from a friend who has worked there and from visiting the campus). The band of misfits that Vaughn and Wilson are teamed up with are a great group and they’ll keep you interested when you realize that you’ve seen all this before, just in a different setting. I absolutely loved the salesmen scenes with Vaughn and Wilson because it’s exactly the kind of improv that you want to see because they’re so good at it! If there was more of that, I think this would’ve been a better film, overall. Wilson’s love interest, Dana (Rose Byrne), was a great addition to this cast and gave it the romantic feel at times. This is a mixture of a feel-good film and a comedy, and for what it is, I think it works pretty well. I just wanted a bit more… A guy can dream though. Can’t he? If you’re looking for a Summer comedy, this is definitely a fun film that you should consider seeing, but not before “This Is The End”, which premieres June 12! Not having seen it, I’m trusting my instincts that it’s going to be hilarious (the reviews have solidified this for me). If you do go see The Internship, you’re going to have a good time and you’re going to laugh a lot, which is the purpose of this film (aside from getting you to conform to all things Google).