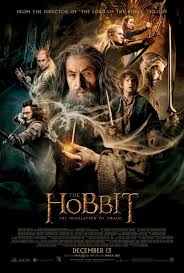 Sequels. There are two sides of emotions that exist upon discovering that a movie is going to have a sequel. For some, you won’t be able to contain your excitement and you’ll be counting down the days until it’s released. For others, the first film may have ruined any excitement for a sequel and you’re just ready to blow it off. However, it’s always refreshing when a sequel is much better than it’s predecessor.

The Dwarves find themselves flowing downstream.

Picking up where The Hobbit: An Unexpected Journey left of, Bilbo Baggins (Martin Freeman) and Gandalf (Ian McKellen) are accompanying Thorin Oakenshield (Richard Armitage), rightful King under the mountain, and his band of Dwarves to the Misty Mountain. As a necromancer builds his army of Orcs, the evil of the world is growing. Upon entering the forest of the Woodland Elves, Bilbo and company encounter large spiders, hallucinations, and the Woodland Elves themselves. Leading the Elves, is Legolas (Orlando Bloom), son of the Elvish King Thranduil (Lee Pace). Alongside Legolas, is Tauriel (Evangeline Lilly), an attractive “she-elf” who helps detain the dwarves.

Let’s not forget the reason that Bilbo and the Dwarves are out on a quest. The group is headed to the Misty Mountain so as to Erebor, the Dwarves once thriving home. The only problem, is the fact that a dragon by the name of Smaug (Benedict Cumberbatch) is guarding the gold and treasures of the Dwarves people. With the power of courage and one ring that could rule them all, Bilbo the burglar will have to outwit Smaug in order to help his new friends. Finding familiar beats as those in the Lord of the Rings trilogy, this second Hobbit film makes great strides and continues to tell an incredible story.

Not being a huge fan of the first Hobbit film, I was pleasantly surprised by this sequel. Combining elements of the book with elements of the LOTR movies certainly worked in this finds benefit. With a shorter runtime and a fun cast, this is easily one of the better sequels of the year and Peter Jackson is slowly returning to form.

I am a huge fan of LOTR, so I really enjoyed all the little hints and cameos that were in this film. It was great to see Bloom back as Legolas and his archery and killing skills make this movie all the more enjoyable. The addition of Tauriel’s character adds some much-needed female power to the film, as well as a love interest for Kili (Aidan Turner). In fact, the Elves and their fighting techniques really help move this film along, while also keeping your interest. The Orcs and their growing numbers will also remind you of the LOTR trilogy, as these guys are ugly and gruesome. It’s always a joy to watch them fight the good guys, as they typically die in spectacular fashion.

The Dwarves look at their forgotten city.

I still hold firm to the belief that Martin Freeman is perfectly cast as Bilbo Baggins. His reluctant nature and newfound courage really help him in tricky situations and the ring transforms him into someone else entirely. Playing Smaug, is Freeman’s Sherlock counterpart, Benedict Cumberbatch. The two exchange wits in the film and their sequences together are some of the most exhilarating in the film. The detailing of Erebor and Smaug getting around in there is jaw-dropping, as is the rest of the set design. If there’s something that Jackson does well, it’s allow you to see Middle Earth for what it is and have you enter the world through what he shows you. The gorgeous landscape sequences that are placed throughout the film give you a clue as to why Jackson keeps making these movies.

Coming in around two-hours-and-forty-one-minutes, this film is shorter than an Unexpected Journey. It never felt as long as it really was and I’d like to believe that’s because of some key moments in the film. I found myself really enjoying this film, especially when a large sequence would begin taking place. There’s a twenty-minute scene involving barrels in the film that every critic and fan will be talking about for quite some time. The look and feel of it all is breathtaking and it’s so much fun to watch as it plays out. The same goes for every fighting sequence in the film, as they feel more like something you’d see in a LOTR movie. That fact alone, may be why this film is such an improvement over the dull and long first Hobbit film. The Desolation of Smaug feels like a LOTR movie and fans of the films and the books are going to eat that up.

The glorious and most magnificent Smaug!

Despite not being as long as the first Hobbit film, The Desolation of Smaug does have some pacing issues. Especially towards the end, the film starts to drag even after we meet Smaug. The reason being, is that the film tries to intertwine five different sequences that all have very different feelings to them. While a couple are action packed and moving quickly, the others are slow and meaningful in some way. The ending does take a while to arrive and you start to wonder what could have been cut, or whether or not two movies should have been it for The Hobbit. We don’t see much of Gandalf this time around, which sucks, because McKellen takes the character to new places in this film that are really interesting to watch. Worse of all, we don’t get enough Smaug! Well, we do, but he’s awesome and I want more of him!

The Hobbit: The Desolation of Smaug is so much better than The Hobbit: An Unexpected Journey in almost every way. You feel like you’re back in Middle Earth and the characters are full of life this time. You can find yourself enjoying the film more and finding fun things to take away with you. The action is better, the script is better, the film is shorter, and there’s more action! So, what’s not to love, besides a few pacing issues? If you’re a fan of the book, the LOTR books or movies, and even the first Hobbit film, you’re going to have a great time with this. Even if you hated the first film (like me), I still think that you’ll enjoy this one. It made me want to go re-watch the LOTR trilogy and I’d like to think that’s a good thing. I guess that all we can do is wait a year for the final Hobbit film, but this one is more than enough to excite and hold you over til then.

The Hobbit: The Desolation of Smaug Trailer
http://www.youtube.com/watch?v=a3-f4tysKyo