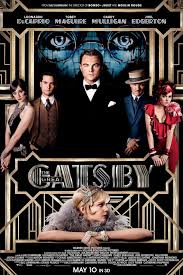 This review is certainly long overdue (that rhymed. I’m a genius). Before I saw The Great Gatsby, I was eagerly awaiting its’ debut! It was going to come out around Christmas last year, but Director Baz Luhrmann wanted to convert the film to 3D. That’s what the media says, at least. I read The Great Gatsby a few months ago in my Junior English class and instantly fell in love with the novel! It’s incredibly well written and captivates the imagination that F. Scott Fitzgerald had. That imagination captivation is the angle that Luhrmann went with in this newest rendition of the film.

Lots of people either loved this movie or hated it. I’ve found very few people who are in-between on it. Personally, I loved this film! I was simply mesmerized by its’ beauty and elegance (something that Luhrmann does well). Also, the fact that my favorite actor, Leonardo DiCaprio, played Gatsby only made it better. I’m not being biased when I say that DiCaprio is the best part of this movie. I loved all the cast and thought they all gave the best portrayals of their characters, but DiCaprio stole the show with his astounding range of emotions and dedication to the role. I dare say that his performance, like most others of his others, is Oscar worthy. The beautiful scenery in this film, the new and old music, and the incredible over-the-top entertainment fuels this incredible film. It’s visually captivating and pleasing to the eyes and ears. The grandiose party scenes, for me, captured what a bland 20’s party scene couldn’t. With the inclusion of 21st century hip-hop, many people hated the film due to its’ modern feel. I, however, loved the addition of modern music to tell a tale that would have then been a bit boring. During the roaring twenties, Jazz Music was new and widely despised by many, including Fitzgerald. Hip-Hop has sort of the same effect these days. Tons of people dislike it, but there is a lot of it to dance and party to.

Perhaps the hip-hop reflected Fitzgerald’s distaste for Jazz. Also, Jazz Music (at the time) was becoming a big factor in the African-American community. Hip-Hop started in a similar fashion. Nowadays, most everyone enjoys Jazz and Hip-Hop is slowly finding a home in more people’s hearts. The Robert Redford version of Gatsby was boring and lacked that imagination that we all had when reading this novel. True, it was much more accurate than this new version, but it lacked the feeling of new and exciting, which this new version captured very well. I’ll stop rambling now, and give you the top ten things I did and didn’t enjoy!

I’m sorry, old sport, but I’m afraid all the imagination in the world couldn’t help you beat this smile.

I loved this movie a lot. I know there will be a lot of naysayers, but I choose not to pay attention to them. I know I didn’t have a “What I Didn’t Enjoy” section this time, but it’s because there was very little that I didn’t enjoy. If anything, most of what I enjoyed is what other people didn’t. Everything from this music to the visuals in this film had me slack-jawed. I loved this film even more a second time. I paid closer attention to details and little things that we actually really cool. During some of the scenes, Lana Del Rey’s “Young and Beautiful” is adapted into a jazz version and plays in the background. This whole movie is a work of art that all should see. Whether or not you like the film itself, you’re still going to wind up enjoying most of what the film has to offer. If you love DiCaprio, like I do, you don’t want to miss this film!