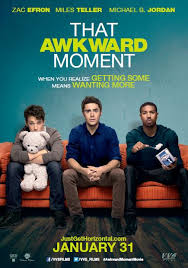 What’s a person without their best friends? I mean, those bonding moments are things that you’re never gong to forget and the memories will last a lifetime. When you’re younger, you’ve got all the time in the world to make mistakes and goof off with your buddies. As fun as those times may be, you do have to mature and eventually settle down. It may sound bad at first, but you’ll come around to the idea when you see how great it can be.

The boys are back in town,

Jason (Zac Efron) is the kind of guy who keeps a roster. By that, I mean that he has a list of girls that he can call up anytime to hookup. So far, he’s happy being single and wants to be as far from a relationship as he can be. Daniel (Miles Teller) is the quick-witted kind who’s also very self-absorbed. He has no trouble getting with new girls by any means necessary and his wingwoman, Chelsea (Mackenzie Davis), is anyways there to help. Mikey (Michael B. Jordan) is a  married doctor, but his wife Vera (Jessica Lucas) is seeing another man and wants a divorce.  As a result, Jason and Daniel vow to stay single with Mikey and hook him up with some new girls. That’s all good on paper, but no one can resist love.

When Jason meets Ellie (Imogen Poots) at a bar, things begin to change for him. She’s smart, funny, fun, and the prefect girl. Knowing that this spells trouble for himself, Jason attempts to hold back and keep things casual. At the same time, Daniel and Chelsea start hooking up and their feelings begin to get in the way of their friendship. All the while, Mikey is still trying to maintain his relationship with Vera and stops searching for other women. While the guys spend more time with their women, they begin to lose each other and that special bind that they had in college. They know what the future holds and they’re not ready to get old and settle down yet. It’s up to them to decide what’s more important; their bet or their love life’s?

Jason and Ellie are getting serious…

I’m conflicted when it comes to That Awkward Moment. I laughed at a lot of what happened, but I also felt awkward at many points in the film. While the sex jokes and sexual conversations are funny and seem realistic, they also go overboard and leave a bad taste in your mouth. There will be many young men who can’t relate to a lot of this film, but I’m sure there’s also quite a number of young men who can. Perhaps that’s what they were going for?

Each lead actor in this film makes it fun for a certain reason. Efron brings confusion into the mix, Teller brings hilarity, and Jordan brings sincerity. These three young actors are shaping up to be the new faces of Hollywood and that’s a very great thing. It’s a lot of fun to see these guys drop the serious act and have fun being your “typical” guys.  They work incredibly well together and each scene offers smiles and laughs for the audience.

Daniel and Chelsea are getting serious…

The conversations that take place in the film are not for the faint of heart. The language is vulgar and a lot of the subject matter deals with sex. Honestly, that’s not entirely out of the ordinary for a group of younger guys. This film does a really great job of capturing the spirit of younger men and some of the things that they discuss (to some degree). Whether you like that stuff or not, it sometimes happens and it’s funny. I was holding my gut after the first ten minutes because what they were talking about was so hilarious. The scenarios that these guys depict are hilariously real and everything is believable because these guys do seem like best friends.

As funny as this film gets, it’s not in the clear as far as clichés go. For the most part, the film tries to work around notable clichés and it pretends like you can’t tell what kind of movie this is. At the end of the day, the film becomes a romantic comedy that can’t escape: love declarations, breakups, makeups, and finding love where you never expected it. Certain events transpire for no apparent reason and they just confuse the overall feeling of the film. It puts all its effort into being funny and not enough effort is put into being romantic and caring. There are a few tender moments, but they’re few and far between.

Mikey just wants his wife to love him…

Something I really disliked, was the depiction of young guys and how they see women. The film comes off as very misogynistic and almost every girl is used as an object. Whether it’s the discussion of what a girl did or what they’re going to do to a girl, Teller and Efron’s characters come off as major scumbags. I’ve never met a guy with a roster and I don’t know many guys who brag about their sexual exploits with women. I’m sure those people are out there, but it’s rare that guys divulge into those sorts of things. Instances were somewhat uncomfortable to watch and the vibe I got from the women sitting around me was that they were severely displeased with what was going on.

As I said earlier, this film is geared towards a male audience. Even if you don’t agree with what you’re seeing, you’re probably going to laugh and enjoy part of it anyways. The chemistry in the film is what keeps you interested and Miles Teller steals the show with his impov-like dialogue. Jordan is enjoyable to watch and his talents aren’t wasted here. Efron is the only one who really comes off as a douche and he’s just not a likeable character. I questioned why Imogen Poots would want to be with him, but then again, he is Zac Efron. With that in mind, that’s the only reason women are going to want to see this film and they may not like it. There are moments to enjoy and moments to cringe, but if you can stomach it, you’ll have a good time with this film.