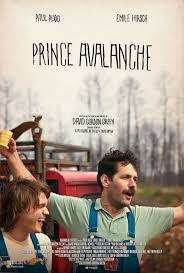 Have you ever looked at the yellow diver lines in a road and wondered where they came from? Who lays down the white border lines and repaves the crappy roads? Personally, I’ve never seen someone go and spray those lines down, but I assume that someone does it. Man, wouldn’t that be a boring job? Who would want to spend their days painting lines on an empty road that seems to go on forever? Well, there are two people who actually come to my mind…

Alvin and Lance are laying down new reflector squares.

Alvin (Paul Rudd) and Lance (Emile Hirsch) are two highway road workers, tasked to repave and redo a road that was burned in 1998. Away from the big city, Alvin finds peace and serenity among the isolated world around him. Lance, on the other hand, despises the lonely life he has and wants to make his way back to the city lifestyle. With these contrasting feelings between the two men, conflict is bound to arise. Also, Alvin is romantically involved with Lance’s sister, Madison (Lynn Shelton).

With all the time and road in the world, Alvin and Lance find themselves with little to do and not too much to talk about. Together, the two butt heads and try to create fun for themselves, despite their lonely conditions. The two men have women at home, yet Lance is the only one eager to return to his. Alvin seems to like the remoteness and prefers it to his life at home. With only each other to rely on, the two must come together and make the most of their time with their incredibly interesting job.

Alvin likes his alone time where he can finally be himself.

For months, I heard people rave about this small film and I was in shock that a film about highway workers could be interesting. I’ve always been a big fan of the comedic side of Paul Rudd and I’m not too familiar with his serious side. Emile Hirsch has been amazing in everything that I’ve seen him in, so I didn’t have any worries there. More than anything, I was just reluctant to give this film a shot and now, I really regret waiting so long to see it. What I got out of it was a wonderful story about the unique bond between two men looking at life through different lenses.

Paul Rudd excels as Alvin, one of the film’s two leads. As much as I like comedic Paul Rudd, I must say that his serious acting is a thing of wonder. His character does have some very funny and quirky lines, but he’s predominately a serious character that loves to be alone. He really finds himself inside of Alvin and his characters approach to life is astounding. He manages to make the most of his reclusive job and even manages to learn more about life from his buddy Lance.

Lance is more laid back and wants to get back into the city.

Speaking of Lance, can we talk about how great of an actor Emile Hirsch is? Seriously, this guy is incredible! As Lance, Hirsch brings realism to a character who spends his day painting lines on a road. He has little to no desire to be out in nature, especially with the big city so close to his reach. His escapades out in nature are hilarious and are pretty truthful to what most men in his position would do. He helps Alvin come out of his shell and aids him in his chance to live life to the fullest. Hirsch’s chemistry with Rudd is a work of beauty that makes this film all the better.

Interestingly enough, director David Gordon Green has really left his comfort zone for his two films this year (the other being Joe, a drama with Nicolas Cage & Tye Sheridan). Among his resume, Green has teamed up with funny men Seth Rogen, James Franco, Jonah Hill, and Danny McBride more than once. His previous films include: Pineapple Express, Your Highness, The Sitter, and Eastbound & Down. Personally, I applaud Green for taking humor in a more unlikely direction. Not many people would think to set a drama/comedy against a road paving backdrop. The comedy hits hard and the dramatic elements are sweet and true. I like most of Green’s films and his ability to get comedy across in the most unusual situations is very rare in today’s world.

This is how you have fun when you’re working a road painting job!

My only real issues with Prince Avalanche come with the pace and timing of the film. Although the film only runs an hour-and-a-half, the film seems to go by rather slowly. Perhaps it’s the wandering nature of the film and its exploration of the life of a road line painter. Or, it may be the dry dialog that occurs sometimes, between the two leads. While most of the comedy and drama works, there are a few instances where it falls flat or drags on for too long. Other than that, the film excels in almost every degree!

Prince Avalanche is not your conventional comedy/drama mash-up. The film is set in reality and deals with conversations and events that actually occur in real life. Rudd and Hirsch make extraordinary bounds in their performances and make this little, unknown film soar! This film has taught me, and will teach others to give even the most obscure films a chance. You’re going to be very happy that you did.