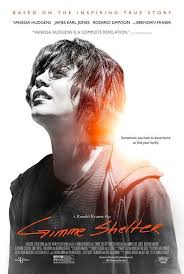 Everyday, it seems as if there’s another story about a runaway child, lost in the big world. For reasons ranging from abuse to not being understood, thousands of teenagers choose to flee because they feel they don’t have another choice. We never truly know why people behave the way they do, but if we can see the bigger picture, perhaps we can understand where they’re coming from and seek to help them.

Apple gets in a taxi and gets as far away from her mother as she can.

16-year-old Agnes Bailey(Vanessa Hudgens), or Apple (as she prefers to be called), lives a troubled life. She currently lives with her mother, June (Rosario Dawson), who physically and mentally abuses her. One day, Apple decides to call a cab and go search for her father, whom she’s never met. She hitchhikes and walks, and barely finds her way to where she thinks get father lives. All she has is a photograph and a letter from him that allows her to find his house. Upon reaching her father’s marvelous estate, Apple finally meets the man she never knew and asks for a place to stay.  Tom (Brendan Fraser), her father, is a wealthy Wall Street executive with a family of his own now.  Despite his wife (Stephanie Szostak)’s reluctance to provide Apple shelter, Tom takes Apple in and tries to set her straight.

When Apple has issues in the following mornings, it’s believed that she is pregnant and Tom wants to get her to a clinic to have the child aborted. However, once Apple saw the ultrasounds, she ran out of the clinic and went searching for a new place to stay. When she gets in an accident the next day, Apple wakes up to Father Frank McCarthy (James Earl Jones) praying for her. He helps her find a home for pregnant teenagers who want to keep their babies and Apple undergoes the care of Kathy (Ann Dowd), who tries to protect her from her mother and wants to help her set her life straight. This film is “based” on a true story.

Apple goes searching for her father.

Gimme Shelter falls in line with films that deal with abuse and Foster Homes, but slightly separates itself with a character who runs away from everything good. With an interesting take on this story, Director/Writer Ron Krauss strives to tell a story that, in theory, should be hard to watch. In reality, it’s an odd telling of a sad story that comes across as inauthentic. Still, there are a few good moments in this film.

Vanessa Hudgens is the only great thing about this film. She completely redesigns her look and ultimately becomes unrecognizable (at times). The snake bites and eyebrow piercings are frightening, but more so are the black eyes and scars on her body. Hudgens adopts a faux Jersey accent and incorporates slang that her character grew up speaking. She gets deep into her character and has many great scenes that are a testament to the fact that she is a pretty decent actress. She elevates the actors around her and in her most fragile scenes, starts to connect with the audience. Her emotional depth is fantastic and she carries this film on her shoulders. If she sticks to more roles like this, it’s not crazy to think that she could be one of the better young actresses working today.

Apple is on her last leg and really cares about her unborn baby.

I applaud Brendan Fraser and Rosario Dawson for really trying to get into their characters, but both fall short and never add much feeling to this film. They’re fine, but it’s their poorly written dialog that ruins them. Dawson looks atrocious with her rotten teeth and slim physique, but her character is so uneven that you can never get a good feel for her. As for Fraser, it’s clear that the character wants to help Apple, but every line comes off stale and it doesn’t seem like he’s as emotionally invested as he should be. As the polar opposite parents of Apple, it’s important that they are fully developed characters so that we can get the best picture of how Apple feels about them. Instead, we get fragments of that and never connect to these people.

As one of my friends put very well, “you care about these people on a surface level.” You understand that these young women have come from terrible places and are struggling to survive. However, that’s about all the emotion you’ll feel. You never connect with any of these characters and although you know that you should feel for them, you never do. It’s a huge problem in the film that I couldn’t get past, especially after having just re-watched Short Term 12. Instead of getting characters who emote through every resource they can, we’re stuck with one-dimensional characters who just tell us why things are tough for them. We rarely get the sense that these actors believe what they’re saying. The emotion is lost and without it, we don’t know what to think about these people.

Apple tries to be strong and her father wants to help in any way he can,

Worse than anything in this film, is it’s hour-and-forty-minute runtime. The film becomes excruciatingly dull about halfway in and the third act is dragged out like no other. I found more excitement and joy by making shapes with my candy box. It felt like the film room three hours to tell a story that can be told in about an hour. Speaking of story, this film’s “True Story” is actually based off of two stories about two separate girls in separate scenarios. One girl had the abusive mother, while the other girl had the Wall Street father. When those two stories are combined, the film feels like it’s a made up story and it’s hard to believe that this one girl had parents on the extreme ends of the spectrum. There’s not a time where you feel like these characters are real and the film does a poor job “honoring” the brave women at the end. Taking artistic liberty is one thing, but if you’re not confident in your story, don’t make one up and hope for the best.

Hudgens will be the reason you go see this film, that is, if you have heard about it (which is highly doubtful). There’s been nothing that I’ve seen that indicates that these women were real and that makes it hard to want to go see it. I wanted to feel something when I saw this film and I just didn’t. There are two heartbreaking stories within this film and neither resonates well. Its predictable, it drags, and there’s nothing to grab on to. You’ll leave the theater confused about how you should feel and in a week, you’ll completely forget about this film. Gimme Shelter shoots itself in the foot and hugely misfires. There are many films just like this that do a much better job, which is why this film is not going to do well.