Fruitvale Station is easily one of the best films I’ve seen this year for numerous reasons. Its message is one of sorrow. Its story is one of tragedy. Its characters are full of life and are more human than we ever realized. Its viewpoint on the tragedy is unclear. All of those reasons in more fuel this incredibly well done movie on the true story of Oscar Grant, a 22-year old man who was shot in the back in Oakland, after a BART (Bay Area Rapid Transit) police officer claimed he was trying to pull his Taser on Oscar.

What really amplified this stories effect on December 31, 2009, was the fact that people on the BART were recording videos of what was happening. On the train, prior to police involvement, Oscar Grant was attacked by another man and his “gang”, which led to a brawl involving Oscar’s friends. When the BART reached Fruitvale Station, Oscar and his friends got off and were met by police who brutally shoved them to the ground. In an effort to calm things over and explain what happened, Oscar got up to talk with the officers, who then tried to detain him. During that short amount of time, Oscar was shot in the back for no reason and the footage of that was uploaded to YouTube.

With this film, we go in knowing what will happen. The film boldly opens with the cell phone footage from 2009. When we meet Oscar (Michael B. Jordan), he’s explaining to his girlfriend Sophina (Melonie Diaz) that he only was with some other girl once and that he wants to be with her forever. This somewhat moody scene is lifted up when their daughter Tatiana (Ariana Neal) comes in asking for help because of her nightmares. Oscar assumes the role of the father well and invites her to sleep in their room for the night.

The next day will be December 31, 2009. Oscar couldn’t have the slightest clue as to what would happen later. However, this day plays out a little bit differently than most would assume. We see Oscar struggle with moral decisions. He loses his job and lies to his wife about it because he wants to seem like he has it all taken care of. He makes poor decisions early on, but then he recalls all he’s been through and how his family has always been there for him, so he decides to make a change. He wants to be a better person. Unfortunately, we will never know if he follows through. The film ends as you would expect, but it’s how we get there and how we come to know Oscar that makes the ending even more tragic.

This film is unlike most you’ll see this year. With the Trayvon Martin case verdict and this film being so close together, audiences can’t help but compare the two. I know I did. Although, that doesn’t take away from this film in the slightest. This film keeps hold of your attention and allows you to form your own viewpoints on the matter. The director could have stuffed this film with dialog or events that make you take the side defending Oscar, but he didn’t. At the end of the movie, there are some post-credit “what happened here” sentences. They state that the officer who shot Oscar claimed that he was trying to use his Taser. He was sentenced to two years in jail, but got out in 11 months. It was at that moment that a woman behind me exclaimed “Michael Vick served two years for dog fighting”! That astoundingly true fact really stuck with me… If you’re looking for more incentive to go see this phenomenal movie, look no further than my Top Ten Thoughts on Fruitvale Station! 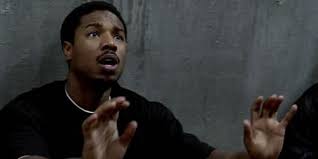 Oscar pleading with the police and trying to explain his side of the story.

Fruitvale Station is one of the most moving and conversation-provoking films that I’ve seen in a while. While never choosing a side, the film tells Oscar Grants’ true story beautifully and leaves side choosing for you. Michael B. Jordan leads this amazing film in a performance that will define his career and will lead him to many other great roles. The cast of this film handles Coogler’s script excellently and it shows in their performances. Fruitvale Station is a movie that will have you thinking and talking for days, and hopefully weeks to come. The timing of its release paired up with the verdict of the Trayvon Martin case only amplifies the films affect and why we should be talking about this film.