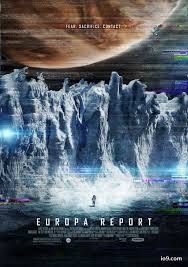 Europa Report is certainly not a big, blockbuster film. It’s a lower budget Sci-Fi movie that, in my opinion, is one of the better Sci-Fi movies I’ve seen in awhile. The movie follows the exploration of a Space Crew to Jupiter’s moon, Europa. The goal being: We will find water and life underneath Europa’s icy surface. The movie is shot in very distinctive ways. We’ll get some POV’s, some far-shots, some Found-Footage shots, and even some mixed shots. Altogether, the ever-changing film style really works for THIS film.

What I really liked about this film, is that it captures that American essence of wanting to explore what’s out there in the universe. We’ve all wondered the same thing. Are we alone in the universe? Is it possible for other species to live on other planets? Well, in Europa Report, the business side of the mission explain that Europa’s icy surface is caused by the temperature fluctuation and the combination of hot water patches below the ice’s surface. These conditions suggest that under the ice is a vast ocean that has  similar living conditions to those of oceans on Earth. This fuels the drive for wanting to see if it’s really true.

This film also holds true to Sci-Fi legends like 2001: A Space Odyssey and Moon, in the sense that its’ depiction of space is very realistic. If someone is outside the pod, in space, all you hear is their breathing in the microphone. The eerie silence of space and the motionless stars add a layer of intrigue and spookiness. The cast does a great job of seeming lifelike in certain scenarios. While it has many aspects of horror and fright, this film always has that underlying presence of adventure into the unknown that really helps connect you to the it. I really like this movie a lot and you’ll see more of why that is in my Top Ten Thoughts on Europa Report! 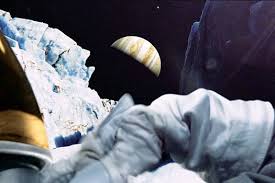 Check out the view… Beats staring at Uranus… (Yes, I did just make a joke about Uranus. It’s not that of a deal…)

This film has a lot of really great aspects to it. It’s relatable, it’s adventurous, it’s got a great cast, and it has a lot of heart. It’s very accurate in terms of its’ spacial deception and I applaud that. It’s a lot of fun to watch and is definitely one of the better films that I’ve seen this year! This is an independent film, so it’s getting limited release on August 2nd, but you can watch it now in the comfort of your own home on these “hot days” at https://itunes.apple.com/us/movie/europa-report/id661172900 or at http://www.amazon.com/Europa-Report-Watch-Before-Theaters/dp/B00DNUF7KW/ref=sr_1_1?ie=UTF8&qid=1372851797&sr=8-1&keywords=europa+report. Renting is always a nice option!