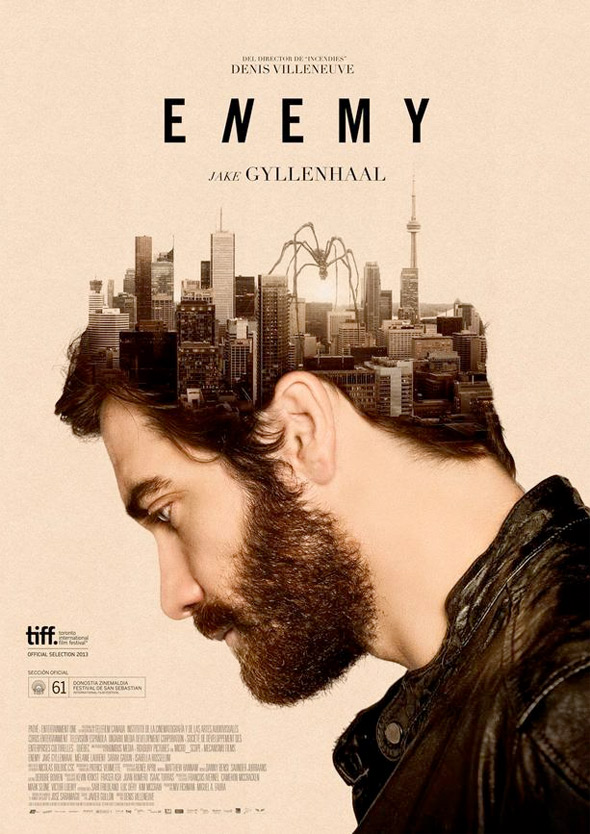 The mark of a great film is its ability to keep you guessing and to promote discussion afterward. There’s something so enjoyable about dissecting a film and it’s deeper meanings and it’s always fun to go back and try to pick up on what you missed. Piecing together the clues in a mystery is a long process, but you get a larger sense of what the director was going for and you understand certain aspects of the film much better. I love for films that leave me asking questions and searching for answers and other opinions.

Adam Bell (Jake Gyllenhaal) is a college history professor who seems to live the same days over, and over again. He lectures on chaos being order that’s not yet been deciphered. The tyrants of the world repeat history and rule through many schemes. Adam goes home, has male-dominating sex with his girlfriend Mary (Melanie Laurent), and then she leaves him to grade papers. This seems to be an endless cycle, until a coworker recommends a film to him that comes to affect him in a profound way. While watching the film, Adam notices an actor who looks exactly like him. Adam lays awake at night pondering what he saw and then makes it his mission to find this man.

After doing some research, Adam discovers that the actor’s name is Anthony Clare (Jake Gyllenhaal) and he manages to track down his address and phone number. During the first call Adam makes, Anthony’s wife Helen (Sarah Gadon) picks up and believes that she’s talking to her husband. When Adam finally gets ahold of Anthony, the two agree to meet and address their situation. When the two meet and discover that they’re more alike than they thought, their realities become twisted and the truth becomes obscured. Now, the two men are seeing the possibilities of the others’ lives and things become difficult between them. They and the audience are left to wonder, “what is real?”

Anthony Claire is looking for something.

I was very impressed with last year’s Prisoners, as I was able to decipher the truth and connect the dots after doing a lot of theorizing and clue finding. Enemy, also directed by Prisoners director Denis Villanueve, left me with a similar process after watching it unfold. I was: confused, unsure, excited, slightly disturbed, and very intrigued by what I saw and piecing together the puzzle was a lot of the same. The concept of this film is what got me hooked and Gyllenhaal’s recent works made me all the more excited. Every aspect of this film is meant to confuse, but it’s also meant to give you things to consider and dwell upon. It took me a while to figure this film out, but I really liked it in the end.

Jake Gyllenhaal was tasked to play two very different roles that are both full of complexion and when they meet, both characters also start to change. These performances solidified Gyllenhaal as one of my favorite actors, as his range knows no bounds and how he develops the two characters is outstanding. While the history teacher is fascinated that he has a double, he’s also frightened by what it may mean and Gyllenhaal expresses that through inflections in his voice, shaking hands, and rapid blinking. As for the actor, he sees the possibilities in having the others’ life and views the situation as a chance to lead another life. His mischievous ways and alternative motives are all in Gyllenhaal’s eyes, body language, and his tone. Gyllenhaal is fantastic in this film and really carries the psychological aspects of it.

Anthony and his wife are confused by the situation.

Laurent and Gadon both give great performances that especially shine when they are unsure of what their significant other is doing. They notice little differences in their men and when Gadon discovers the history teacher, she’s not sure what to belive. Speaking of being unsure of what to believe, this film has many dream sequences dealing with a dark room full of men observing naked women. In the end, the dream always ends with a Tarantula. The sequences are spliced within the film and edited with perfection, as they force you to consider what they mean. The rapid cuts and changes that Villanueve makes are perfect and they keep the film rolling.

The mystery behind the film is a huge part of why this film succeeds. The lingering shots and scattered clues demand your focus and when you look back on them, you can’t help but wonder why they were placed there or why the focus was held for so long on something. This mixing of clues keeps you invested in the film and you’re always wondering what will come next. I have so many theories in my mind and there are no clear answers. For some, that may annoy and upset. For me, I love that and I love being able to look deeper into the film. The symbolism within this film reminds me a lot of Only God Forgives, except without the Oedipal undertones, violence, and religious metaphors. There’s so much to decipher among the chaotic, un-linear telling of the story and you can only hope that you can achieve order.

Another great addition to this film was its eerie score that played perfectly with the progression of the film. The violins and their creepy sounds build suspense and there are loud, quick moments that elevate tension into outright fear. Coupled with the excellent score, was the haunting cinematography that found shelter in the shadows and dreary Toronto skyline. The two go hand-in-hand in their effort to create a dark atmosphere and they achieve just that. This film looks creepy and it made paying attention even more important.

Enemy is quite the film and it’s an interstate view into the life of a man struggling with his own identity and then having to deal with someone who looks just like him. There were a few times that this film moved slow and some elements that didn’t work perfectly, but this a very fine film that should be appreciated for what it is. Gyllenhaal and Villanueve make an exciting team and I can’t wait to see where they go from here.