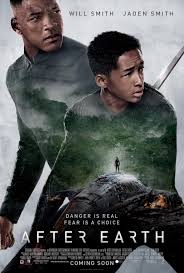 Well, this is a review that I’m not entirely looking forward to. I’ll just come out and say that After Earth is by far the worst movie I’ve seen this year, alongside Movie 43. I had so many expectations for this movie and I was really hoping it would be somewhat good. Before seeing this, I wasn’t a huge fan of Jaden Smith, but I was happy to see Will Smith coming back to do something that wasn’t Men in Black III. For a while, that kept my excitement, until the day I IMDb’d (new word!) it and discovered that the director for this film was M. Night Shyamalan. Shyamalan is known for his incredible movies with amazing twists (Sixth Sense, Signs, Unbreakable, The Village sort of), and for his god awful movies (The Happening, The Last Airbender). Never before have I seen such an incredible director fall so far within a matter of a couple of decades. Once I knew Shyamalan was directing this, I started to get really worried for this film. I’d heard a lot of terrible things about it from other critics I know, but I tried to go into this movie with an open mind.

The premise for this film seemed interesting enough; for the last 1000 years, everything on Earth has adapted to kill humans. Everything, which I wrongly assumed meant animals AND plants, only applied to FOUR animals. A lion-thing, a giant eagle, some apes/monkeys, and a killer slug! That’s it! That is all we see! Besides the shortcomings of the “killer Earth creatures”, the movie also falls short in any sort of character development. Jaden Smith plays Kitai Raige (super futuristic name!), a boy trying to become a space ranger so that he can follow in his father, Cypher Raige’s (Will Smith) footsteps. He doesn’t and his father is an emotionless man who rarely says anything nice to his kid. Their father-son bonding trip fails when their ship crashes on Earth and it’s up to Jaden to conquer his fear and save the day! I’ll go into more detail below, in Tiffany’s Top Ten Thoughts on After Earth!

Jaden… Now this is a story, all about how, our lives got flip turned upside down, it’s a feeling of hate like the opposite of your birth, I’ll tell you how we went from Pursuit, to that crap, After Earth… (bu dun dun dun dun)

I struggled a lot while trying to find ten good things to say about this movie. Hopefully, my sarcasm transfers well through the internet. This film lacks any emotional and character development, a decent story, and a purpose. From what I’ve read, this movie was just a film to get Jaden in the business as a “big-timer”. Any movie would’ve been better than this. Shyamalan has disappointed once again and should really stop making movies. He once was great, but oh, how the mighty have fallen. More than anything, I’m disappointed in Will Smith. I get that he wanted to get Jaden in the business, but this is his first “big” movie (I don’t count Men in Black III) in years, and he spends it sitting down and barely acting. It’s sad to see all that’s changed since Pursuit of Happiness, in which the father and son had a great relationship. I think they might be able to do a decent movie together, but only if Jaden hones his acting “skills” and Will decides to choose a decent movie. So, do yourself a favor and don’t go waste your time and money on this film. You’ll leave disappointed and upset, just as I did. They took an interesting concept and made an absolute mess of it. Hopefully, we won’t see any more from Shyamalan for the rest of his life. Instead of watching this, how about you go treat yourself to Sixth Sense, Signs, or Unbreakable, all movies that will blow you away and give you a satisfaction that After Earth can’t even hope to achieve.